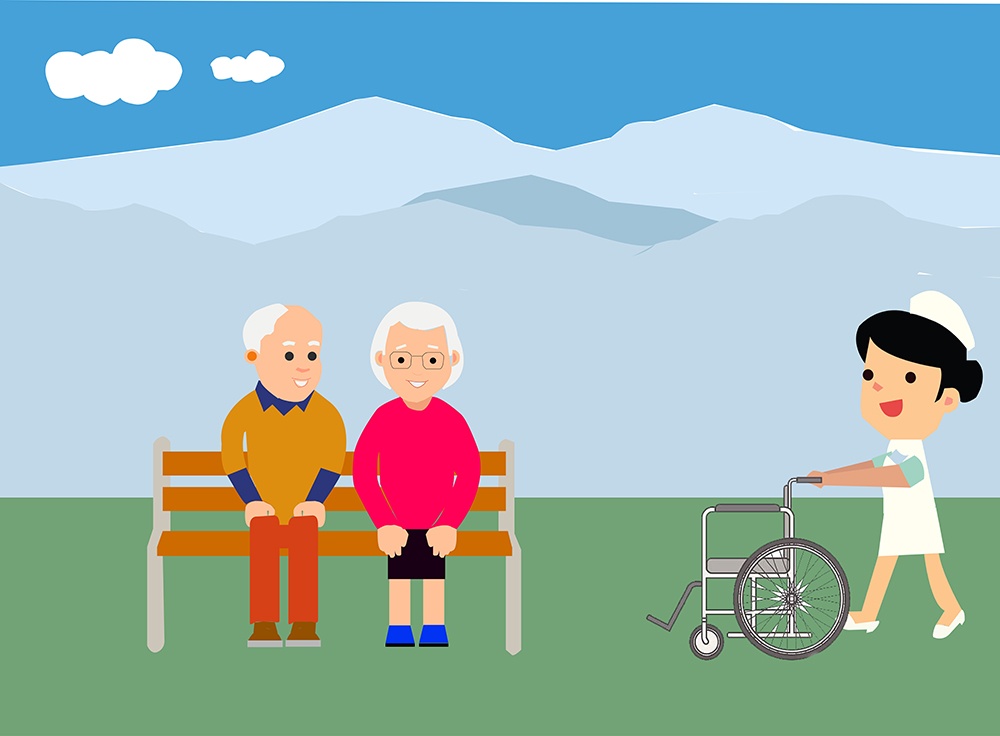 Mrs. Arathi Mukharjee a 54 - year old wife, had to wind up her carrier to care for her husband who is ailing with pseudo bulbar palsy, a crippling disorder in the highest order. Husband being diagnosed with this progressive, chronic clinical condition Mrs. Mukherjee had to dash into the role of a primary care giver.

It was nothing but a bolt from the blue for the Mukherjee couple and had to shelve all their post retirement plans as they were caught unawares into a desperate situation so early in life.

A shaken Arathi is not willing give in to any life challenges, is battle ready for a long tedious long term care role. She visited me to find the challenges in the new role as the spousal caregiver and to know more about the coping skills.

Woman taking care of the man

Caring for an elderly, ailing spouse is an unimaginably difficult task, especially when the caregivers are elderly themselves. Many studies have found to have established that wives fare worse, physically and emotionally, than husbands. Women tend to marry men older than themselves, and men generally have more health problems and shorter lives.

So it’s typically the woman taking care of the man. In our social gerontology practice past 18 years, we have been able to follow hundreds of spousal pairs in which one cared for the other until he or she died, we have a fuller picture — and it’s not happy news for women.

Frequent hospital visits, difficult and oft-repeated diagnostic tests, complicated treatment procedures coupled with managing the distress is far more than just a task when managed single handedly. In the case of Mr. and Ms. Mukharjee, they are a childless couple and left with fewer filial support systems as their siblings are scattered around the world.

Those distant families are not much of help due to the changed family ties and those who are close to them are equally old as they are and having to deal with their issues of health and family. Anjali had to deal with the managerial aspects associated with her husband’s illness as well as the emotional stress of seeing her husband decline day by day.

The women who were caregivers (as usual, a great majority of the group) were a touch past 70, on average, caring for husbands about the same age at death. The caregiving husbands were a little older – they averaged 75 and the wives they cared for, late sixties or early seventies. Cancer was the leading cause of death followed by stroke, dementia and arthritis.

Currently millions of people across the country provide free caregiving services for a chronically ill, disabled or aged spouse, family member or friend during any given year. There is a much higher likelihood of receiving care from a spouse than from an adult child because in majority of instances, children live separately.

In reality, approximately one quarter or above (27percent, from our study of 800 sample) of caregivers who are currently caring for a spouse are themselves over the age of 65.

For majority of women, leaving the husband’s care to someone however professional was a bit uncomfortable. Like Arathi; she struggled with the ethical dilemma of not caring her husband enough when he needed most but delegating the responsibilities was causing internal conflict inside her. It only made Anjali’s problem bad to worse. She ended up as a full time carer to her husband and got situational house arrested.

The hurdles of a spousal caregiver

Many researchers have found that spousal caregivers may be likely to experience depression and anxiety at an even higher rate than those for whom they care. Such depression can be spurred by a wide variety of emotional struggles. Care recipients may no longer have the cognitive ability to relate to their spouse, or be physically incapable of engaging in traditional intimacy, leaving spousal caregivers feeling as though they have lost the husband or wife they once knew so well.

Many times, caregivers may feel as though they’re adjusting to taking care of an entirely different person, especially with diagnoses like dementia, which can leave caregivers mourning the loss of their previous life with their husbands or wives. While caregivers may feel guilty for these emotions, they are completely normal. Although you may fear talking with others about the changes in your marriage, support groups of caregivers in similar situations may offer a chance to talk about your challenges with people in similar situations.

Caregiving spouses often begin to feel very isolated from friends (society) and feel tremendous guilt about their own unmet needs. Subsequently, they take on this “labor of love” and let their own positive health habits drop off to the side, putting their health at risk. The combination of loss, prolonged stress, the physical demands of caregiving and the health vulnerabilities that simply come with age place an older spousal caregiver in a danger zone. Spousal caregivers especially need to know and recognize the symptoms of burnout and how best to cope.

It is a state of physical, emotional, and mental exhaustion that may be accompanied by a change in attitude — from positive and caring to negative and unconcerned. Burnout can occur when spousal caregivers don’t get the help they need or if they try to do more than they are able — either physically or financially.

Here, I wanted to share my own personal story to prove a different aspect. Most of us assume that, when people have spent decades as husband and wife, they will take care of each other as they age. If one spouse should get a debilitating illness, wouldn’t the other spouse be the natural caregiver? Mostly they are, but other times the ‘able’ spouse may be the least capable person when it comes to long-term care of an ill spouse.

Spousal caregiving is not the answer

My mother was a wonderful, caring person. She used to be the default caregiver for her parents and for her mother-in-law in her younger days. When my dad was in his 70s, he had a severe stroke and bed-ridden for a quite long time. Mom had health issues of her own by then, including severe osteoarthritis. The fact that Dad needed intense rehabilitation and Mom was in no shape to take on this challenge, so I, as the adult child in town with my parents, became the person to make all of the arrangements. Spousal caregiving is not the answer.

During the few months Dad was in the nursing home, she could, on some level, understand why he acted the way he did. However, his sometimes bizarre behaviour humiliated her. This was not the dignified man she married and spent her life with. She felt horrible for him that people would see him acting in a way that was, to her, undignified.

She felt embarrassed for herself that people would see her husband in this light. Bed-ridden and helpless, her beloved husband of decades, was no longer the man she married; and Mom was worried and anxious about him started to go overboard trying to juggle between many roles on her own. I know she’s going through tough times and started to break down.

I know many wonderful marriages where the spouse becomes a perfect caregiver. But that’s the ideal situation. I have no statistics to give readers about how many spouses become good caregivers vs. how many do better turning the job over to a care agency or the adult children.

Spouses are often not the best direct caregivers and this the point I want to highlight.
I know it wasn’t just Mom who had problems with this caregiving role many others also feel the same. I also know it had nothing to do with her love for him. She just couldn’t be his daily, hands-on caregiver.

The emotional pain was too great. I believe this happens more often with diseases such as dementia, which affect the brain, than with physical ailments. The main advice I have for people who run into this problem is to roll with it. And seek outside help. When you take action, both parents will probably be happier. **

I have seen many caregiving spouses knowingly or unknowingly resorting to neglect and abuse when the caregiving tasks are overwhelming. An ill elder is more likely to be abused by an elderly well spouse than by adult children or other caregivers. Sometimes that is because of a history of spousal abuse, but often it’s not. Many a time it is out of desperation, the spousal caregiver neglect or abuse the ailing spouse. To pre-empt such untoward incidents like spousal abuse, better to hire in-home help for as long as that works. That relieves the ‘well’ spouse of some responsibility and this freedom can be a life saver, literally. Then, when that no longer works, move the parent or parents to assisted living or if needed, a nursing home. Adult children must try to understand your aged parent who can’t be a primary caregiver to the ailing spouse in all the cases.

Women in our societies in India, are the traditional care givers from a tender age. When they are school going kids they guard their younger ones and then it goes on till their grand parenting and later spousal care. With nuclear families, and women in workforce, it is clearly an extremely difficult task to perform. Various factors we discussed earlier like age difference in marriages, longevity, gender difference in disease etc,. contribute to the expectations. But we can conclude that caring for an ailing or dying spouse takes a greater toll on wives, and they’re more at risk and this suggests that women are in greater need of support.